Posted on October 6, 2012 by Rachel Shoemaker

Hidden within the walls of the mission style Alhambra is a roomy foursquare.  The Alhambra was one of Sears most popular models.  The Sears Alhambra made its debut in 1918 but it wasn’t until ten years later that two were built here in Tulsa.  There is one in Sunset Terrace and one in Childers Heights.  They were built within a year of each other, 1929-1930, and they both have identical minor modifications which makes me wonder if they were built by the same person, a contractor perhaps.  I don’t know who the original owners were, yet.  I do plan to investigate that and when I find out I will post an update.

The Alhambra exterior was usually stucco.  Both Alhambras in Tulsa are stucco.  I have seen Alhambras with cypress siding which was $140.00 extra and I have seen them in brick which the buyer purchased locally.  Since Sears did not furnish brick, cement, plaster or stucco the price of the Alhambra did not include your exterior finish.

The Sears Alhambra from my 1923 catalog

I was a little confused the day I found these houses. It was in August of 2010 and I thought the heat finally got me. Then I realized that they were different houses and I had not circled back around. It was the porte-cochere on the second house that made me realize I was indeed at a different house ha!

This Sears Alhambra in Childers Heights has a porte cochere

Occasionally Sears featured the interiors of their most popular models in their catalogs. The 1923 catalog features the interior in color! Isn’t that cool? So pretty, love it when they did this!

One of the things I like to do is look through my catalogs and find variations from year to year whether it be a price or a window in a different place or left out or even a change in light fixtures . Below is the page from my 1924 catalog. 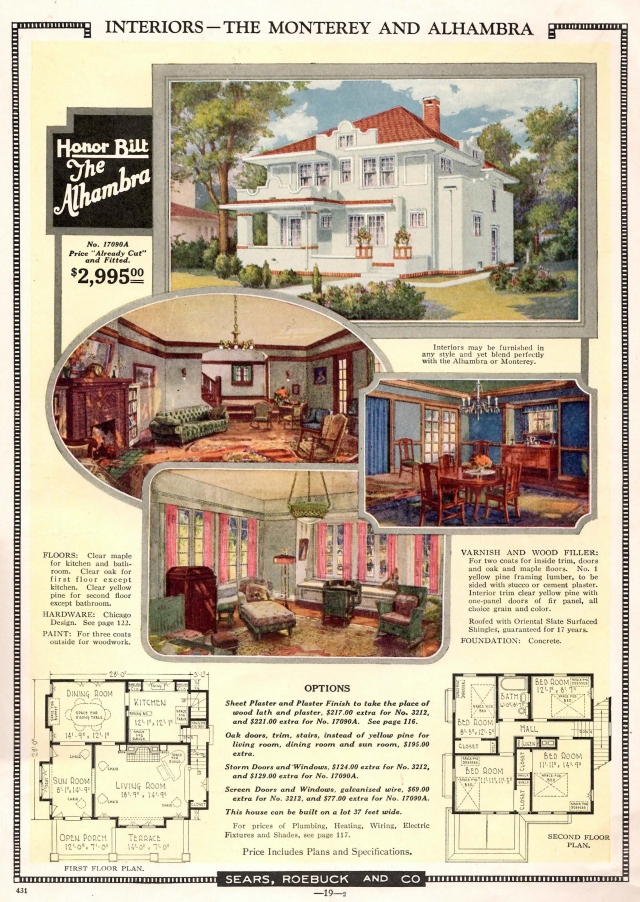 The 1924 Sears Alhambra catalog shows the house and interior on one page. Do you notice the differences here and there? I do. That is why I posted it.

I have found several Alhambras during my google drives of cities across the country but none in Oklahoma, other than here in Tulsa. Have you seen an Alhambra somewhere else in Oklahoma? It is a very unique and distinct looking foursquare and really stands out, I think. Let me know if you find one!