The Sears Osborn and Oriental Peaks

Last week the subject of oriental peaks came up in the Sears Homes Group.  Rosemary asked for photos of the Sears Osborn since it is a good example of a house with oriental peaks.  I posted a couple of Osborns that I have found here in Oklahoma and one I found on flickr several years ago came to mind.  So, I shared the flickr Osborn. 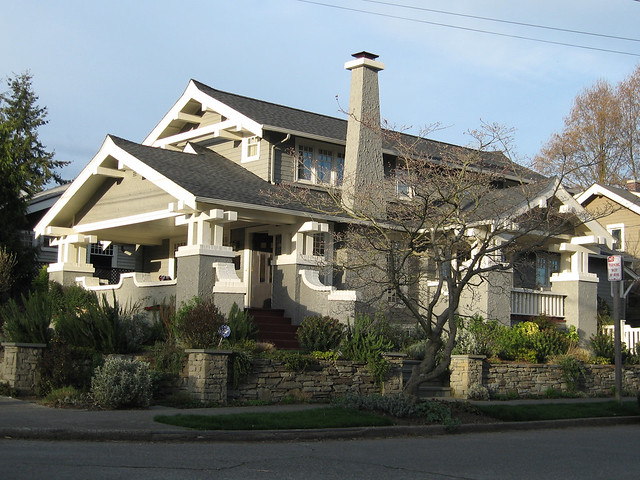 Then it hit me, this can NOT possibly be a Sears Osborn!   That’s not Sears “construction”.    I read the comments, including mine from four years ago. 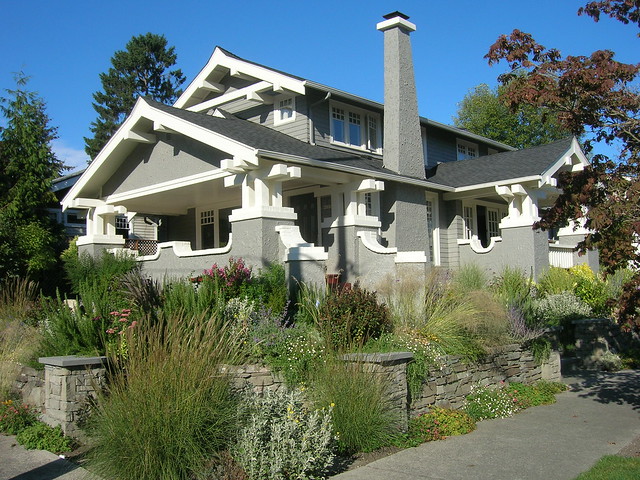 How about those oriental peaks? Those are quite popular out there. Rosemary shared this sketch with the group for discussion.

Image from A Field Guide To American Houses. Virginia and Lee McAlester. Thanks Rosemary for the lesson!

The last year the Sears Osborn was offered was 1929.

I could tell the Sears “Osborn” on flickr, which is in Wallingford.  Seattle, Wa, had been greatly modified but still, the exterior, that is not Sears! No way. Then the 1911 build date. I set out to see if that was correct and, it is.

Gosh, if I could only get inside! So next came the tough part…figuring out the address. I did, of course…finding addresses is what I do 🙂

Once I figured out the address I discovered the house was recently on the market. SCORE! I can see inside now. Check it out here. I knew immediately that it was not from Sears. Even through all of the upgrades I knew. See that door, look close. For example, that’s not Sears Millwork. However, that door might be a clue as to where the house came from! This house was built from a plan or pattern.  But who? I collect catalogs. I recognize the door as a recommendation in Henry Wilson’s bungalow pattern books.

A page of doors from Henry Wilson catalogs. Recognize the one I circled? Sears didn’t offer that style of door.

You don’t identify a house from a front door, inside joke here, but the millwork can give us clues. I checked Henry Wilson and no luck for a match. My thoughts were possibly Jud Yoho. Off I went….ask me about Jud Yoho now. LOL That’s another blog or a facebook album.

Then I had a break in the case! I checked the assessor website and look what I found!

I found this pre-remodel photo on the King County assessor website. NOW I know why they think it is a Sears Osborn! Do you see it? Look close, VERY close.

Maybe this image will help. Remember those Highlight Magazines for Children? Think of this as one of those activities where you find the likenesses.

It’s the SAME house! I have found the house that was used in the Sears catalog FOUR YEARS after it was built!

Who gets the credit for designing this bungalow? Henry Wilson? Jud Yoho, who BTW lived in this neighborhood and is responsible for several of the houses including the one directly behind this house which happens to be the same model he and his wife Elsie lived in in 1911. Maybe Edward Merritt of Merritt Hall and Merritt Architects? Edward Merritt would later partner with Jud Yoho. Victor Vorhees? Another Seattle architect?   OR….. Maybe Edward T Osborn who was a Seattle architect 1910-1930?  I think that Osborn is a good suspect as this point!   Sears? JK I think I have ruled that one out now.

Is this a Sears Osborn that I found in Miami, Oklahoma? I need to see the inside!

Is this an Osborn in Tonkawa, Oklahoma? It has a matching garage too, meaning the garage has those oriental peaks as well. That siding, 😦  sorry.

Then there is this Sears custom home that was obviously influenced by the Osborn.

I found this custom Sears home in Bedford, Pa using a testimonial.

One more and I’ll stop. Promise.

Sears Osborn in Dearborn Michigan. I bought this AP photo several years ago. Come to find out it’s a testimonial house.

First I found the house using the name of the person in the AP photo. A few months later I stumbled on the testimonial. Just my luck.

You won’t believe what that Dearborn Sears Osborn looks like now!

I found that the Dearborn house had been on the market a few years ago and pieced together this image for comparison. Notice the exterior has been remodeled? The interior remains original, unless that has been stripped now too.

Sears Osborn 1919 From The Golden West. The same landscaping rocks at the corner too and the hydrant was replaced with a shrub. What an impressive bungalow whether a pattern or a kit!

2 Responses to The Sears Osborn and Oriental Peaks