Inside a Sears Modern Homes 306 / 215, A Guided Tour With Blueprints

Posted on February 1, 2016 by Rachel Shoemaker

My last blog featured the exterior of a Sears Modern Homes 306 aka 215.

Today we get to see inside of that house and we are going to do so through the original blueprints! I’m going to point out a few things in the blueprints and show them with their catalog images. It’s going to be informative! Educational.  AND, FUN!  I LOVE matching millwork and hardware like this.

Let’s go!  The front is a great place to begin!

When I found this house a few years ago she was pink. She has recently been painted I have been told. This beautiful queen anne is at 50 West Church Street West Chazy, NY 12992 and it is currently on the market!

This original blueprint, courtesy of the homeowner, shows the front elevation. I’ve circled a few things that I’m going to show you.

This page is from my 1912 millwork and materials catalog. I have matched the corresponding numbers from the blueprints with the millwork in that catalog.

The description for the Sears 306, 215, specifies the Superba door. It is also seen in the blueprints. The hardware specified is the Stratford Design. Compare with the front door of the Sears 306, 215, in West Chazy Ny.   The other exterior door can be seen here. 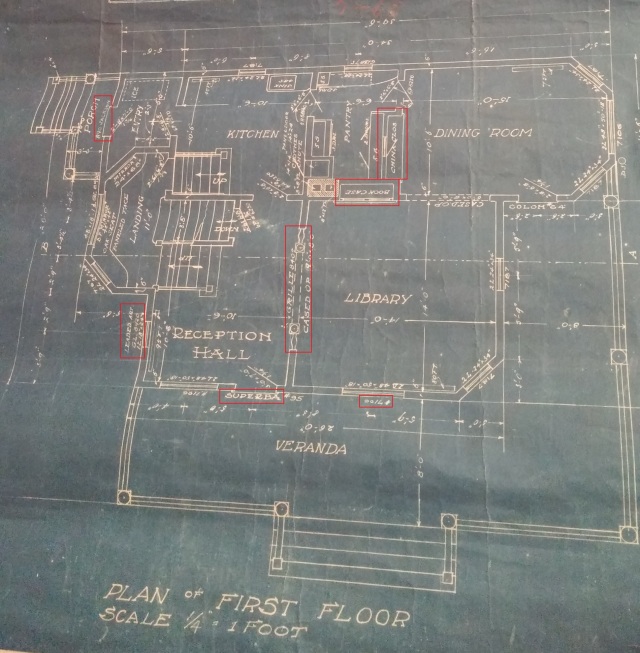 Let’s step inside! Once again I have highlighted a few things in this original blueprint that I have matched with millwork in the 1912 Sears millwork catalog.

Welcome! This is the reception hall. I would like to point out the leaded glass cottage window and the leaded art glass. Those can be seen in the original blueprints.

The best cottage windows on the market.  🙂  This page is from my 1912 materials catalog.

This beautiful colonnade separates the reception hall and the library. It’s the Lorraine colonnade and is in the blueprints as well.

From my 1912 Sears millwork catalog, the Lorraine Colonnade.

This is another Lorraine Colannade from a Sears 306 215 in Livingston NY. The image is from from a real estate listing when I found it a few years ago.

This beautiful grille, as notated in the original blueprint, leads from the library to the dining room.

Artistic grilles will beautify your home. They certainly do as we have seen!

This artistic grille comes with the house but I don’t know where it goes or where it was removed. However, it’s in the catalog, shown above, but not in the blueprints. Maybe it was sent in error?

So, now we’re in the dining room! How about that chandelier? Light fixtures were not included in the package. HOWEVER……. 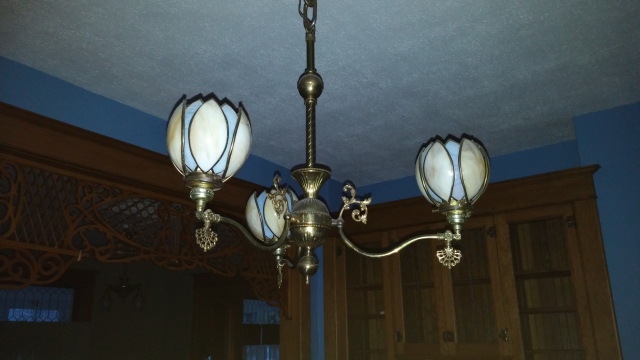 I found the dining room chandelier in my 1912 building materials catalog! Looks like Maude ordered fixtures too. 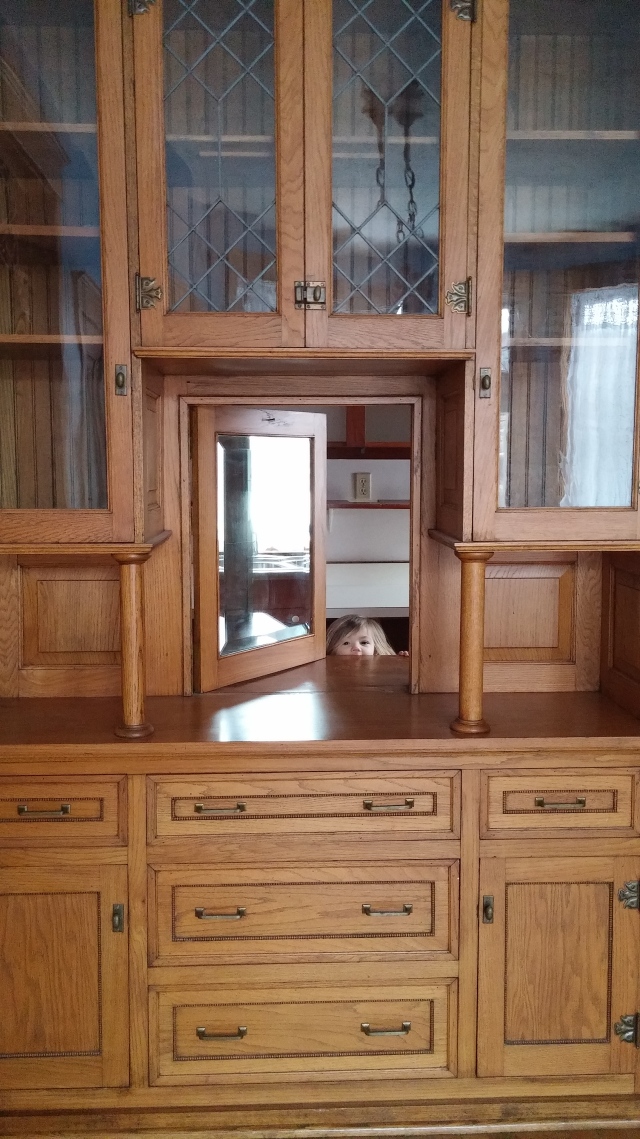 And that beautiful pass through china buffet in the dining room? Oh my!

I’m glad I saved this image! This is from a real estate listing for a Sears 306 215 in Livingston NY. The same built in buffet!

I’ve never seen that buffet in a Sears millwork catalog HOWEVER … it IS in the original blueprint!

Did you notice the bookcase in the blueprints? It should be in the library but it’s in one of the bedrooms upstairs. And those blinds? I think those are original too! I found blinds like that in my 1912 materials and millwork catalog. I bet Maude placed an order for several things from Sears! Just like *Sears* hoped for customers to do!

Did you notice this hinge in the photos? This half mortise hinge is often found in Sears kit homes. 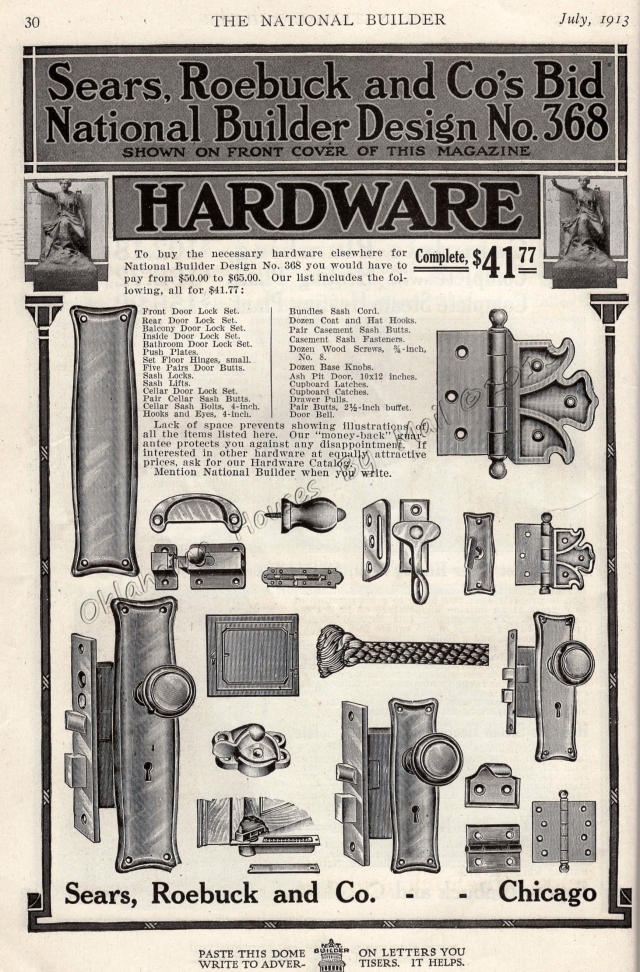 Sears hardware from an advertisement in my July 1913 National Builder. You can see the hinge as well as the Stratford door hardware! 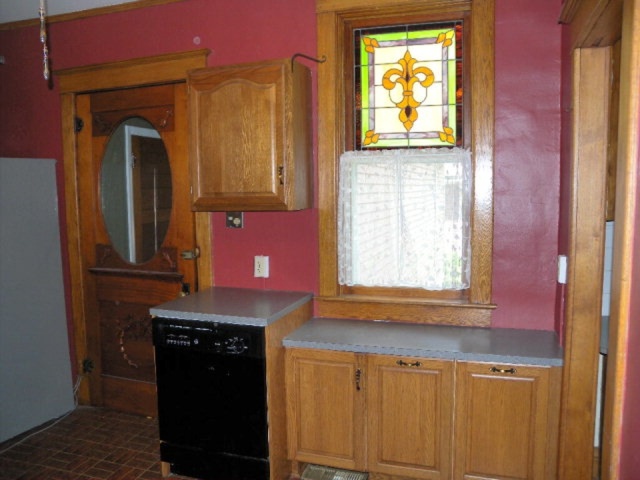 And once again we have that beautiful leaded art glass that we saw in the reception hall!  It also appears the door off the back of the kitchen was moved, an alteration to the house where it was built on to as seen in the first blog.

The original blueprints show a Jackson door off the kitchen. It looks like the window has been replaced. There’s the Stratford door hardware again!

And from my 1912 Sears millwork catalog is the Jackson door.

This is a view of the landing between the stairs that serves the kitchen and the reception hall stairs. That’s shown in the blueprints as well.

We’ve circled through the first floor now. On the left of this image is the Sears 306 215 stairway and landing in West Chazy NY and on the right is the Livingston NY stairway, from a real estate listing that I saved years ago.

Let’s take a look at the details for the stairs since we are here. I matched the inventory/catalog numbers from my Sears 1912 millwork catalog with the numbers shown for the millwork shown in the blueprint that you see.

The more decorative newel is used in the reception hall and the plain newel in the kitchen for the good morning stairs. Except, you may have noticed…I did, the Livingston good morning stairs swapped the newels at the landing. Newels 2, 3 and 4 in this image are very common newels and every millwork catalog and kit home company had them. Those three newels were very common in kit homes and non kit homes. 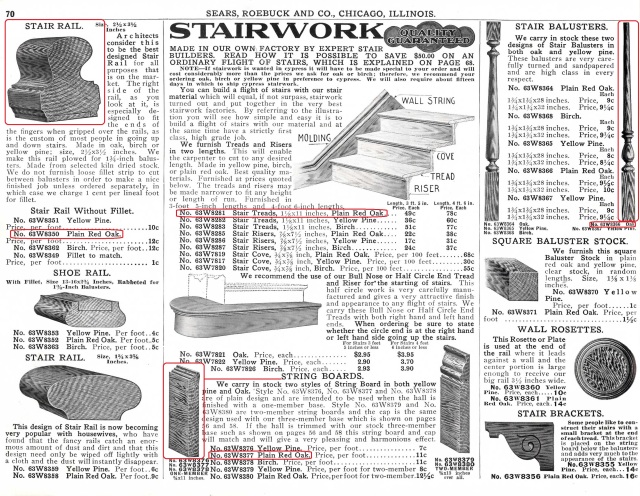 This undated photo of Maude Lawson’s Sears 306/215 was provided by the homeowner. I wonder if Maude sent this in as a testimony and it was never used in a catalog? It’s a GREAT photo! How about that interior? Was that not gorgeous?

The Sears 306/215 from my 1913 catalog, the year Maude ordered her home. The price she paid was probably close to that $1561.00 . Cement, bricks, cement blocks were not included in that price and neither was anything electrical or plumbing. In 1913 the lumber was not pre-cut either. I’m sure she hired a carpenter or two. The 1920 census lists the value of her home at $3,500.

I would like to thank homeowner Amelia Lushia for all of the wonderful photos and documents for this house. What a treat!

If you are interested in buying this house please contact Tina Calkins Covey RE/MAX North Country by clicking this link.

Do you have a Sears 306/215 to report? If so please contact me at searshomes@yahoo.com.

You can see other wonderful homes and blog posts of both Rosemary Thornton and me on facebook if you click here.

And, you can join our closed Sears Homes group on facebook too if you want to learn how to recognize kit homes and pattern book homes!

3 Responses to Inside a Sears Modern Homes 306 / 215, A Guided Tour With Blueprints